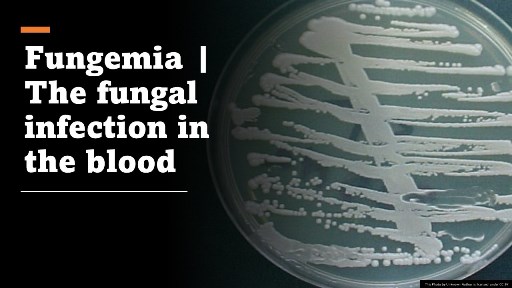 The condition in which fungi are present in the blood is known as Fungemia. This pathogenic fungemia or fungal infection in the blood caused by candida is known as system candidiasis or candidemia.

Fungemia usually occurs in those people who have decreased efficiency of the immune system or have a compromised immune system. This deficiency in the ability of the immune system may be because of neutropenia or some sort of cancer in the blood. Infliximab using the patient may have an increased chance of fungemia even if he is immunocompetent.

Fungemia has a varying range of symptoms which may be mild or extreme. Fungemia can show many signs and symptoms.

These may include similar to those symptoms which occur in severe flow.

Most of the blood infection-causing fungi come under the belt of fungemia but some of the species are especially well known for causing fungemia. In this candide, Albicans is the most common cause of fungemia which causes about 70% of fungemia.

Candida Glabrata comes after it with 10% while aspergillus and saccharomyces are the third and fourth common cause of fungemia respectively. But now the number of fungemia infections caused by saccharomyces boulardii, C. krusei, Candida tropicalis, and C. parapsilosis is also increasing.

It is thought that it may be because of using a large amount of fluconazole and increasing the use of antibiotics. Candidaauris is also rising very rapidly in causing blood infection and is resistant to various drugs. It also causes other fungal infections in addition to fungemia.

The following factors can increase the chance of fungemia.

Fungemia is diagnosed via blood culture using etiologic agents. The blood culture technique made significant progress in the previous twenty years and is very effectively used in the detection of fungal diseases.

Isolation of fungi is also made with a non-radiometric and radiometric system as well as selectively cultured media and LCS. Some blood tests are also used in the detection of fungi in the blood.

Grossly, urine may contain flocculent white debris. Urinalysis may reveal proteinuria, pyuria, and, in some cases, hematuria and/or Candida fungal elements (see Case Example). Dogs and cats with disseminated candidiasis or Candida peritonitis frequently have had nonregenerative anemia and mild to marked neutrophilia with pandemic and toxic neutrophil changes (in contrast to other deep mycoses, where hematologic abnormalities are often mild or absent).

Lymphopenia may be present as a result of underlying immunosuppressive illness or drug therapy. Some dogs are thrombocytopenic and have coagulation abnormalities consistent with disseminated intravascular coagulation.

Findings on the serum biochemistry panel in dogs with disseminated candidiasis are variable and nonspecific but may include metabolic acidosis, moderate to severe hypoalbuminemia, and increased liver enzyme activities.

The definitive diagnosis of candidiasis requires visualization of the organism within lesions by cytologic or histopathologic examination and confirmation of its identity using culture.

Candida blastospores, pseudohyphae, and true hyphae can be visualized in swab specimens from the ear canal (ear cytology); tape preparations from the skin; urine sediment, or other body fluids or ultrasound-guided aspirates of abdominal lesions.

Histopathology of affected tissues reveals yeasts, pseudohyphae, and septate hyphae with an associated inflammatory response that is composed primarily of neutrophils, macrophages, and lymphocytes. Multinucleated giant cells may also be present; pseudohyphae and hyphae predominate in invasive infections.

Evidence of blood vessel invasion, thrombosing vasculitis, and infarction may be seen, with multifocal mycotic granulomas in affected organs.

The organism is most readily visualized with special stains such as periodic acid–Schiff and Gomora’s methenamine silver. Immunohistochemistry has also been used to identify Candida within lesions.

When mixed infections with Candida and other bacteria are present, tissue gram stains may reveal bacterial rods and/or cocci in addition to gram-positive fungal elements.

It looks like ulceration on the lower side of the tongue it appears on those patients which have the weak immune system the term fungemia is related to the cells having week immunity for example it appears in those patients having HIV infection its major study is on the horses but its epidemiology is not still discovered the blisters on the lips of the mouth are the indication of antifungal therapy further diagnose is done by different test.

Its clinical analysis is often nonspecific because it has different signs and symptoms in most cases an incurable fever the hematogenous Candidiasis can take place after the oral mucosa or gastrointestinal induction. Different diseases are caused by Candidiasis for example pneumonia arthritis etc.

The foal having Candidiasis also suffered from fungal keratitis and panophthalmitis. But

Candidiasis in human patients is also referred to as pathogenic.

The role of fungus candida SPP in the gastric ulcer pathogenicity is still not determined in one study it was discover that candida SPP gather at the at the ulcer site mucosal layer of the Gastrointestinal of the foal that was died due to ruptured gastric intestine this research shows that these fungal pathogens have a role in ulcer of gastric intestine of foal the horses which are suffering from endometritis have 1 to 5% fungal infection are more likely to called fungal endometritis.

Treatment for neutropenic and non-neutropenic candidiasis is different in candidemia an iv echinocandins are used as initial therapy iv canoechinocadian includes caspofungin, micafungin, and anidulafungin, Fluconazole can also be used as an alternative treatment. It is given either orally or via intravenous therapy.

If there is decreased availability of antifungal or antifungal resistance drugs then amphotericin B can also be used as an appropriate alternative.

Cutaneous and corneal infections are usually treated with a combination of topical antiseptics or antifungal medications and systemic antifungal drugs until lesions resolve.

Persistent infection may result from drug resistance, adverse effects of treatment that necessitate treatment discontinuation, or inadequate drug penetration into balls of fungus that line the bladder wall. Intravehicular treatment with 1% clotrimazole may be effective in these cases. Under anesthesia, the bladder is catheterized with a Foley catheter, emptied, then lavage with sterile saline.

The bladder is then filled with a 1% clotrimazole solution (e.g., 30 to 50 mL for a cat). The animal is rotated to promote contact of the solution with the uroepithelium, and after the solution has been in the bladder for an hour, the catheter is removed and the animal is allowed to recover. Treatment is continued weekly until Candida can no longer be isolated from the urine. Typically, one to four treatments are required.

Ultrasound-guided administration of clotrimazole via cystocentesis to a dog with Candida cystitis was described in one report.

Successful treatment of systemic candidiasis in dogs or cats is rarely described. One dog with Candida peritonitis was treated successfully by surgical exploration and lavage of the abdomen, placement of an abdominal drain, and intravenous fluconazole.

Antifungal drugs other than fluconazole used to treat invasive candidiasis in human patients include amphotericin B or an echinocandin such as caspofungin, 32 both of which must be administered parenterally.

Prevention of candidiasis involves avoidance of excessive immunosuppression as well as discriminate use of antibacterial drugs, that can be personalized to the outcomes of culture and vulnerability whenever possible. Whether Candida species carried on the hands of humans can colonize dogs and cats is not known, but routine hand washing and the wearing of gloves when immunosuppressed animals are handled or intravascular devices are placed should minimize the chance of healthcare-associated infections. Although prophylactic antifungal drug treatment has been used to prevent invasive candidiasis in human high-risk groups, the low incidence of candidiasis in immunosuppressed dogs and cats does not warrant the use of prophylactic antifungal drugs in this group.

Different diseases are caused by fungi which also cause complex diseases. Candida species (especially C. Albicans) are common causes of mucosal disease in humans. Since 2000, Candida has also emerged as an extremely important cause of invasive infections owing to the more widespread use of invasive medical devices and immunosuppressive drugs.

In hospitalized human patients, Candida is reportedly the fourth most common organism isolated from the bloodstream.

Although many human infections result from the invasion of tissues by commensal yeasts in the face of immune suppression, horizontal transmission of Candida and hospital-acquired infections have been described.

Whether Candida isolates from dogs or cats colonize humans is not known. Different antifungals have different effects on a different strain of fungi and different doses and precautions. Some fungi are also resistant to these antifungal agents. The effectiveness of the administration of these drugs is different when taken orally and intravascular